Bring Null Warp Monsters
The main hazard for the dungeon is Warps. Stack a full team of Null Warp monsters. You may want one Mine Sweeper to deal wit the Lock-on Mines. Avoid the Damage Walls
Damage Walls will deal about 9000 per hit. They are avoidable but it does limit your movements. If you are not confident, bring NDW+NW monsters. Aqua Wyrm is Your Ally!
When you defeat the Aqua Wyrm, it will cure any debuffs on your monsters. Defeat them when you are Poisoned, Bump Combo Locked or Ability Locked. 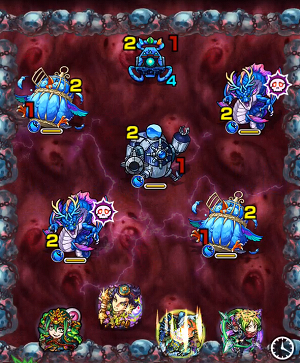 Work your way to the top. The Bluebird will Bump Combo Lock you. You can recover from it by defeating the Aqua Wyrm. Always leave the Aqua Wyrm for last so that you go into the next stage without getting debuffed.

2nd Stage - Focus on the Snakes 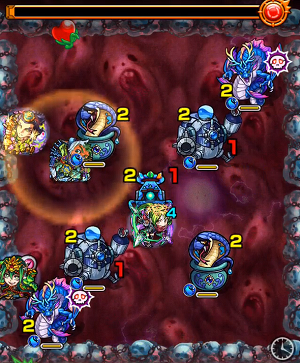 Take down the Snake mobs first since they will poison your enemies. If you get poisoned, you can take down the Aqua Wyrms to cure it. 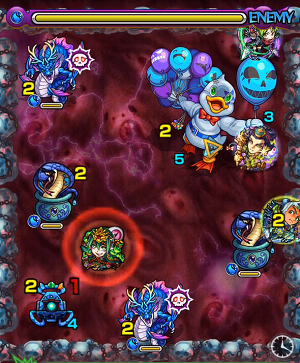 Stop the Poison from the Snake mobs. Afterwards, deal damage to the Mini Boss. There is no one-shot attack from Doug so you can have a drawn out battle. Make sure you cure your Bump Combo Lock when Doug does it. 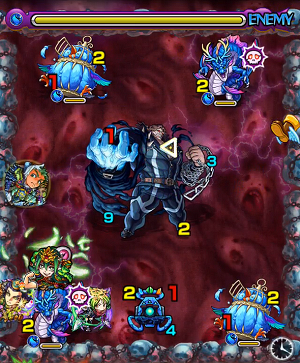 Progression Order
1. Defeat the Bluebirds
2. Damage Doom
3. Defeat Aqua Wyrms when you get poisoned
4. Repeat 2 and 3

Take down the Bluebirds so that you won't get Bump Combo Locked. Keep the Aqua Wyrms alive until you take the Toxwave attack from Doom. 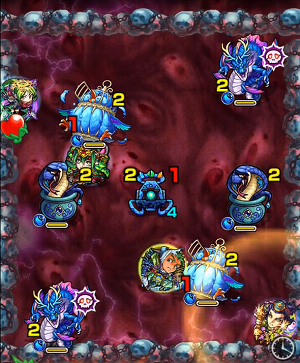 You can use this stage to stall for any strike shots that you have used. Focus on the Snakes and Bluebirds first and then deal with the Aqua Wyrms last. 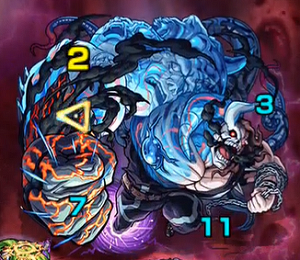 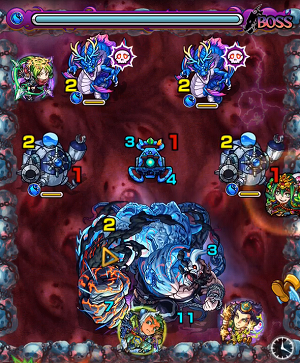 Progression Order
1. Defeat the Mine Machines
2. Damage Doom
3. Defeat Aqua Wyrms when you get poisoned
4. Repeat 2 and 3

Take down the Mine Machines, especially if you don't have a Mine Sweeper monster. When you get poisoned by Doom. defeat an Aqua Wyrm to cure your team. Aim for the bottom of Doom to deal damage to him. 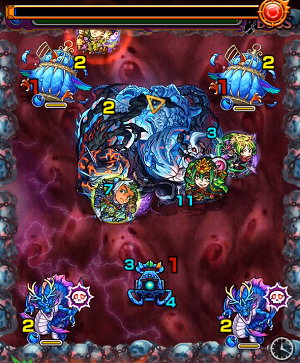 Progression Order
1. Defeat the Bluebirds
2. Damage Doom
3. Defeat Aqua Wyrms when you get poisoned
4. Repeat 2 and 3

Play like you did in the previous stage. Be careful to not stop beside him or else you will take damage from his powerful Horizon Laser as well as the Aqua Wyrm's Vertical Laser. Use the spaces above or below Doom to deal damage. 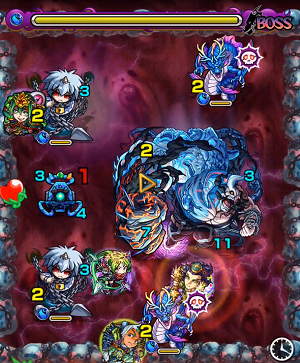 
The Ability Lock damage is very high so you want to take down those mobs first. Another thing to note is that the Damage Walls on this stage will not go away. If you don't have NDW monsters then you want to finish Doom within the first round of turns. Aim for the top and bottom of Doom for damage or else you risk taking damage from his Horizon Laser.

Community content is available under CC-BY-SA unless otherwise noted.
Advertisement